Churches are part of the social fabric that make up society, being present in every community, and have had a long history of making significant contributions to social capital, through voluntary and community development support, particularly to those most vulnerable in society.

In Northern Ireland and the six border counties, the Church sector is diverse and includes four main Churches, the Roman Catholic Church and the three main Protestant denominations (Anglican, Presbyterian and Methodist), as well as many smaller Protestant denominations and a range of other faiths. While the religious community is primarily made up of Christian Churches, there is also a significant minority of other faiths, including Muslim, Hindu, Baha'i, Sikh, Chinese, amongst others.[1]

Quite often the conflict in Northern Ireland is protrayed as a religious conflict (largely between Catholic and Protestants). Churches were frequently subject to sectarian attacks during times of unrest because of this.[2] However, it is important to acknowledge that it would be incorrect to characterise the conflict as a religious war. The roots of the conflict were to be found in a complex range of social, economic, cultural and historical issues.

The role of the Church and Faith based sector in developing a culture and tolerance and respect for difference, promoting peace and understanding and in helping to build reconciliation, was acknowledged and recognised from the beginning by the promoters of the PEACE Programmes.

Church and Faith based projects were identified as eligible for funding under the following PEACE Programme themes/measures:

The majority of Church and Faith based work, funded through the PEACE Programmes, aimed to promote good relations, involving training and education, community development and inter-church relationship building. Work was undertaken on both a single identity basis and joint or cross-community basis.

The Northern Ireland Inter-Faith Forum was supported under the PEACE I Programme to establish a Quiet Room at the Arrivals Lounge at Belfast International Airport, for private reflection and prayer. It was created as the shared space for travellers of all religious beliefs and none and it was intended to be a symbolic and practical expression of cultural diversity that will greet all visitors to Northern Ireland. In 2015, the Forum also established and maintains the Quiet Room at the Belfast City Airport.

The Inter Churches Peace Project (ICPP) was awarded £1.3 million from the PEACE III Programme to help churches to positively impact upon their communities. ICPP was an initiative of institutional Churches - the Catholic, Presbyterian, Church of Ireland and Methodist Churches, as well as the Irish Council of Churches, which during the project represented a number of smaller denominations.

The project helped to identify existing levels of segregation, marginalisation and social isolation which was compared against existing church-led initiatives, to see what additional resources were needed to expand upon the work that was already taking place. The project also provided enhanced mediation support to help resolve local contentious issues between Protestant and Catholic communities and developed a directory of good relations and reconciliation resources for use by churches. It was also committed to creating and publishing case histories of effective good relations, reconciliation and peace work involving local churches.

The project, which concluded in 2015 after two and a half years, supported resources as well as three study and discussion guides for Church groups, a resources directory and a guided discussion booklet for the film ‘Forgiveness: A Step too Far’. One resource includes ‘The Elephant in the Room’ which focused on contentious issues in Northern Ireland, such as identity, parades and symbols etc. Click on the following link to learn more about this video resource: The Elephant in the Room - New Communities.

The ICPP post project evaluation (2015)[3] details what was delivered, the impact made as a result of the interventions and lessons learned. There is evidence that the project led to positive outcomes including attitudinal change, improved relationships between Churches and with their communities. More information about the project can be found from the following link: The Irish Churches Peace Project. 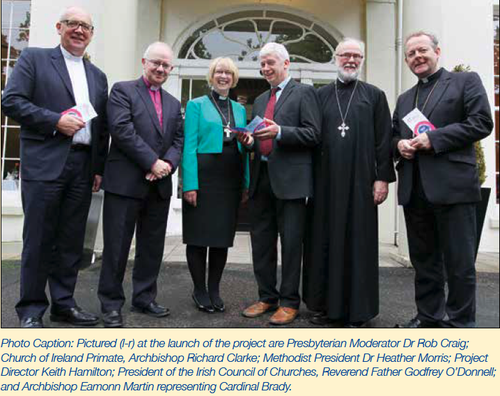 The Scripture Union Border Counties Project was set up in summer 2003, with financial assistance from the PEACE II Programme. Scripture Union, an interdenominational Christian charity, which has operated in Ireland for over 70 years, worked with the Churches, to encourage children and young people in faith formation and development through a wide range of activities and resources.

The project aimed to establish, foster and support Christian-based, cross-community, youth-related activities in the border counties. It promotes reconciliation through social integration and the involvement of the whole community. There is a network of interaction between children, their parents, and volunteer leaders from both sides of the border, as well as with Church leaders from the local areas.

A cornerstone of the project included the provision of interdenominational, cross-community summer clubs for children aged 5-15 years, using community centres, church halls and sports grounds. The numbers of children taking part varied from 40+ for new clubs to 140+ for longer established clubs. The project also had designed a reconciliation-based programme for delivery in local primary schools.

Documents which highlight the peace and reconciliation focused work of Churches and Faith based organisations funded through the PEACE Programme include the following documents. This is not an exhaustive list of reports but does provide a good range of materials related to this theme.

[1] Williamson, D., Brown, D., and Irvine G., (n.d.), Dreams Judged on Delivery: A Report on the Work of Church Based Groups Supported by the Community Relations Council

[4] Fran Porter, (2007), Shared Space Issues 7 From Divided to Diverse Society: Reflections on Sectarianism and Social Diversity from the Churches Sector

[5] Tony Macaulay, (February 2013), Churches and Faith based organisations and their role in Peace Building in Rural Communities