In March 1999, the PEACE II Programme was introduced to build on the success of PEACE I. It became mainstreamed as a Structural Funds Programme[1] (formerly a Community Initiative) leading to the setting up of a Northern Ireland Community Support Framework (CSF) with two Operational Programmes – the Transitional Objective 1 Programme (known as Building Sustainable Prosperity) and the PEACE II Programme.

PEACE II investment was for the period 2000-2004, including an EU Contribution of €531m, and national contribution of €304m totalling €835m. A two-year extension, along with additional funding of €160m was awarded to bring the programme in line with the seven-year Structural Fund cycle, known as the PEACE II Extension (2004-2006). Overall, the seven-year investment totalled a significant €994.5m i.e. 61% (€609m) from the EU Structural Funds and 39% (€385.5m) from National Contributions.

In terms of focus, there was a move from economic development and rebuilding infrastructures in PEACE I to a focus on targeting social need, creating new cross-community linkages, strengthening existing relations, and extending the promotion of reconciliation and respect for difference in a post-conflict area in PEACE II.

The Strategic Aim of the PEACE II Programme remained as with PEACE I which was: 'To reinforce progress towards a peaceful and stable society and to promote reconciliation by increasing economic development and employment, promoting urban and rural regeneration, developing cross-border co-operation and extending social inclusion.’

The Strategic Objectives of the Programme were reframed as: 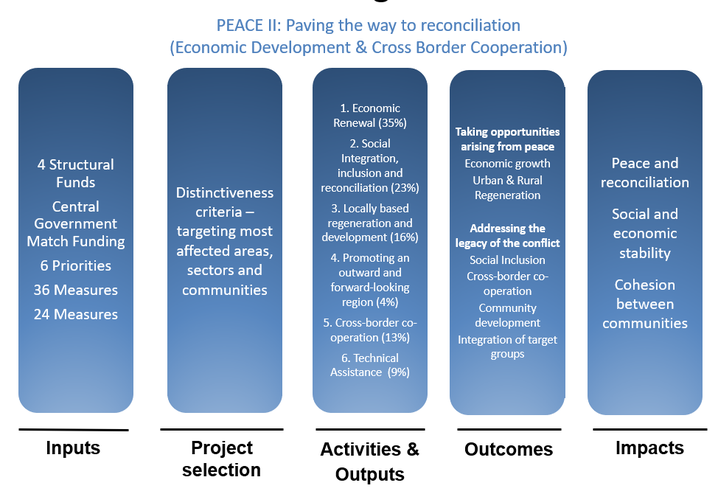 The PEACE II Programme had five ‘distinctive’ Priorities (in addition to Technical Assistance) which formed the backdrop to the specific objectives of the entire Programme.

Each Priority was further cascaded into individual Measures with specific aims to enhance the attainment of overall Programme requirements. Some Measures were sub-divided into specific operational Sub-measures. Overall, there were 36 Measures and 24 Sub-measures, as per the table below:

A fundamental shift in the PEACE Programme occurred when a definition of reconciliation was agreed as part of the PEACE II Extension. Prior to PEACE II, the term ‘reconciliation’ was not well understood nor developed in the context of Northern Ireland’s evolving peace process. To overcome this, research[2] was carried out to help formulate a working definition of ‘reconciliation’ which could be applied as a framework.

The research, which assumes that building peace requires attention to relationships, concluded that: “Reconciliation is understood as the process of addressing conflictual and fractured relationships. This means not only reconciling broken down relationships as the term confusingly implies but building new relationships in some cases. It is a voluntary act that cannot be imposed, and it involves five interwoven strands: (1) Building positive relationships (2) Acknowledging and dealing with the past (3) Substantial social, economic and political change (4) Developing a shared vision of an interdependent and fair society (5) Significant cultural and attitudinal change.”

Based on the increased understanding of the term reconciliation, a set of guiding principles was introduced, known as ‘distinctiveness criteria’, which required every applicant to specify the intended reconciliation impacts i.e. applicants had to demonstrate how their project would contribute to, impact upon, peace and reconciliation in terms of two objectives:

It is important to note that while projects may be primarily identified with one objective their impact generally applied across both. The distinctiveness criteria are thought to have created an environment where applicants had to think about other communities and the needs that exist there. It made a lot of recipient organisations recognise the impact of the conflict and how that might be addressed in as inclusive a manner as possible addressing the needs of other communities. The distinctiveness criteria for project selection helped to define the ‘uniqueness’ of the Programme and the targeting of areas, sectors and groups most affected by the conflict, and on projects making a real contribution to peace and reconciliation.

To help Implementing Bodies with this process, a Distinctiveness Working Group was established to provide advice on the implementation of the distinctiveness element of the Programme.

The PEACE II Programme was framed by ten horizontal principles. However, it was found that the large number of principles diluted effectiveness and added an extra level of complexity to the selection process. Therefore, it was concluded that five of the principles should relate to project section and the remaining five to be know as ‘guiding principles’ to be integrated as part of the programme management. 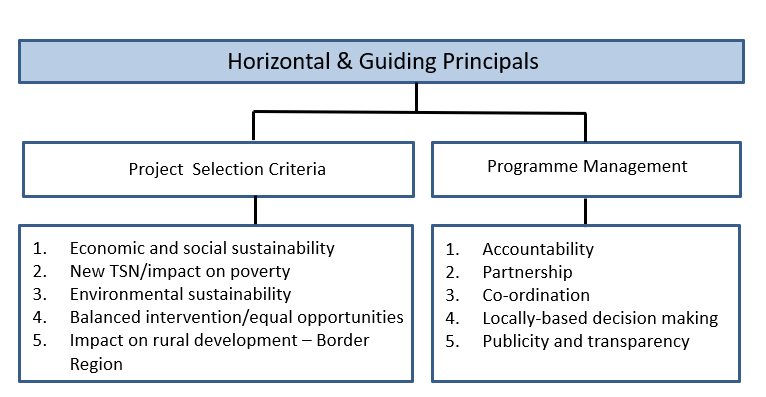 The Programme management structure is summarised below: 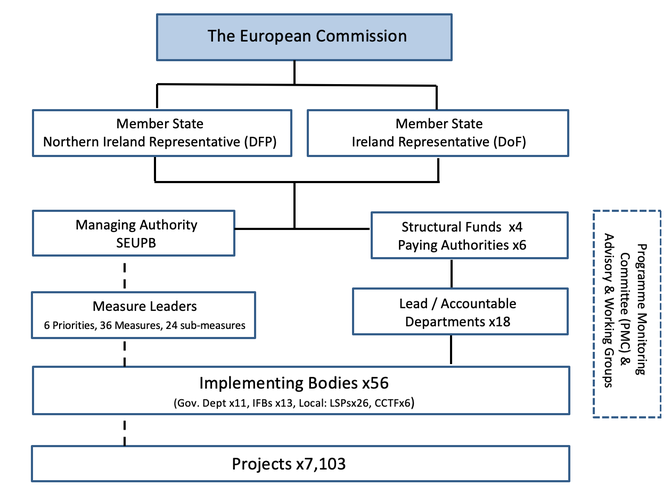 The two Member States that oversaw the PEACE I Programme are the United Kingdom (UK) and Ireland. The interests of the two Members States were represented by the Department of Finance and Personnel (DFP, Northern Ireland) and the Department of Finance (DOF, Ireland), responsible for designating central funding and the overall implementation of the PEACE II Programme.

In PEACE II, The Special European Union Programmes Body (SEUPB) was introduced as the Managing Authority with overall responsibility for the Programme. SEUPB, one of six cross-border bodies established after the 1998 Good Friday/Belfast Agreement, came into being just as PEACE I was coming to a close and PEACE II was agreed and in the process of implementation.

The Programme was supervised by a Programme Monitoring Committee (PMC), which ensured satisfactory progress was made towards the agreed objectives and targets of the Programme. The PMC was chaired by SEUPB.

The 6 Paying Authorities were responsible for submitting payment applications and receiving payments from the European Commission.

In the case where several organisations were acting within a given Priority, then a Measure Leader was appointed to co-ordinate action within the Priority and feedback to SEUPB.

PEACE II was implemented through a number of devolved delivery mechanisms similar to that used under PEACE I. For PEACE II, there were 56 Implementing Bodies (compared to 64 in PEACE I) which included Government Departments, Intermediary Funding Bodies (IFB), Local Strategy Partnerships (LSP) and County Council-led Task Forces (CCTF). The emergence of LSPs, known as District Partnerships in PEACE I, and CCTFs built upon the partnership structures which had begun to emerge in the first programme. 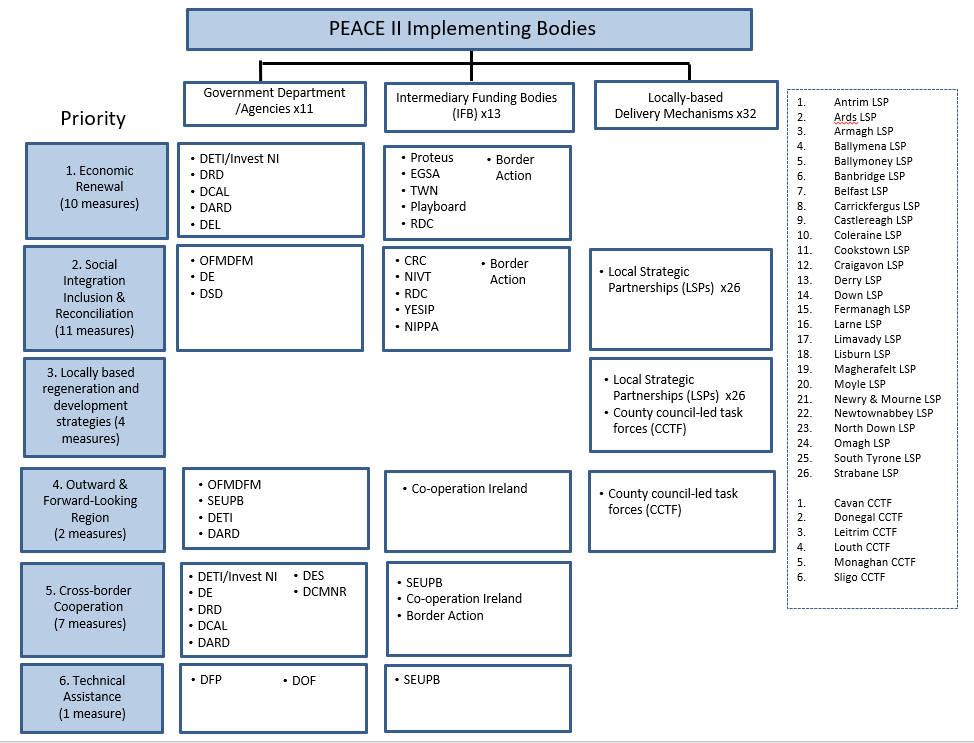 The delivery structure provided a helpful focus for local decision-making and respected the Programme’s horizontal principles of bringing the process as close to the citizen as possible. However, this involvement of a larger number of bodies in programme delivery gave rise to a higher level of programme management costs than would otherwise be the case under a more simplified programme structure.

PEACE II, as part of the European Structural Funds family of Programmes, brought with it an increased emphasis on regulatory compliance and oversight. As a result, the administration of the Programme proved to be more complex and burdensome. Projects tended to be larger and an increase in bureaucracy became a feature of the more targeted approach. This had an impact on project delivery, particularly at the early stages when the new Programme management mechanisms were being designed and implemented.

The Monitoring and Evaluation (M&E) Working Group was responsible for the Annual Implementation Reports (AIR) and worked closely with SEUPB in the commissioning of an independent Mid-term Evaluation (MTE) and follow up Post Programme Evaluation (PPE). Recommendation from the evaluations resulted in an improved evaluation plan and better use of performance indicators. The M&E Working group was also responsible for commissioning Attitudinal Surveys and Community Uptake Analysis.

By the end of the PEACE II Programme 13,503 project applications had been received. Of those applications 7,103 (53%) had been successful within the following Structural Funds:

As with PEACE I, PEACE II adopted a highly participative approach.  Both Programmes were conceived of as practical Programmes to accompany social and political change. At various points throughout that period the PEACE Programme continued to operate during the period of suspension of the Political institutions.

Further reports can be found by accessing the Digital Library

Department of Finance and Personnel (DFP)

Department of the Environment and Local Government (DELG)

Department of Education and Learning (DEL)

Department of Education and Science (DES)